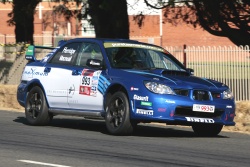 Dean and Glenn have made a great start to Targa Tasmania, equal 6th after the first nine stages, and just 14 seconds off the time of the overall leader Jim Richards.

Competing directly against the most experienced crews in the event, the first days efforts are pretty pleasing. “We’re very pleased with the result today. Obviously it’s fairly different stepping into the tarmac car after having just been in the gravel rally car. The grip levels are hugely different, and just things like using a non-dogbox gearbox and getting used to the timing of the downshifts.”

“The car was initially a bit twitchy and direct, and we used the first three stages to get a feel for the setup and adjust the suspension. In some sections we’re hitting 200 km/h, so you don’t want the car to over-react. We’re pretty happy now we can lean on the car and put in some good times tomorrow.”

Leg 2 takes the competitors out to St Helens and then back to Launceston, with eight competitive stages. The last is at Longford, the traditional town stage getting underway around 2.30pm.

For full results, check out www.targa.com.au