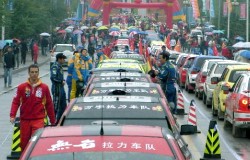 It was a long way to go for what was both a disappointing and an encouraging weekend for Dean and Subaru Rally Team China. Brake problems on the first morning, and an engine failure at the end of day one, cutting short the weekend for the #13 Subaru.

The Chinese Rally Championship visited the far north of the country, Rally Mohe staged over roads near the Heilongjiang River which forms the border with Russia. Although rain in the days prior to the event turned the service park into a mud-bath, the fast and open stages were generally unaffected.

Speaking on his return to Australia Dean commented, “It was a very high-speed rally. To give you an idea, we averaged 142 km/h over stages that were 25kms and 30kms long. In the WRC, stage speeds average 120km/h, plus or minus 20%. One of my notes was a ‘700 flat over crest, flat 400’; so more than a kilometre flat-out. To do those types of speeds in Group N cars was incredible!” 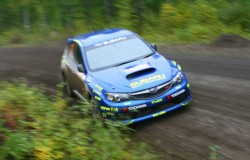 Unfortunately Dean and his co-driver Chris Murphy were unable to show the true speed of the SRTC car when they lost their brakes 7kms into the first stage. “The team traced it back to cut brake line. They think one of the wheel scrapers broke. It allowed mud and rocks to build up, and a stray rock probably cut the (brake) line. Luckily it happened at a part of the stage where it wasn’t too dangerous. With the long straights we were able to back-off for corners, so the time lost wasn’t too bad.”

But by the time they completed the opening two stages, Dean was down in 18th place and more than two minutes off the lead. With the car repaired at first service, they returned for a re-run of the morning stages, posting a pair second-fastest times. Only Englishman David Higgins, the eventual rally winner, was able to better the pace of the new Subaru GRB.

“The speed was really good, and we’ve been buoyed by the run we had. The handling of the car on the high-speed sections was fantastic, and we managed to beat some fairly good ex-Prodrive Subarus in the process. Unfortunately we got to the end of stage 3 and there was a bit of a rattle from the engine and some oil smoke. I backed off a bit on the long stage (SS4, 30km) and still managed to get second!”

Considering this was the first gravel outing for the new car, and the time lost in the morning, seventh outright at the end of leg one was a positive result.

Unfortunately that’s where Dean’s first visit to Rally Mohe ended. The team decided not to start on Sunday, suspecting an engine bearing had failed.

So while the event ended on a sour (and slightly smokey) note, there were plenty of positives to take away from Mohe. And Dean and Chris will be back in the car for the next round, Changbai Mountain, which begins in the final week of September.