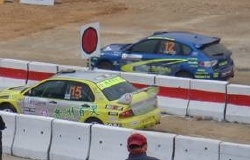 Dean Herridge and Chris Murphy have made a strong start to Rally Shaowu tonight, setting the third fastest time on stage one.

In front of 20,000 local fans, the final round of the Chinese Rally Championship kicked off with a short Super Special stage, the 2.5km twin track allowing spectators to see the cars compete head-to-head. Dean and Chris had a trouble free run in the SRTC Subaru even though, as first car on stage, they were sweeping loose gravel off the top of the track.

Tomorrow the rally gets under way with two short 15km and 12km forest stages that will be repeated two more times in the afternoon. And with 33 crews scheduled to start the leg, the surface of those forest roads is expected to deteriorate with each passing car.