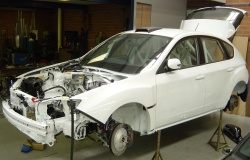 The rally season has an early ‘kick-off’ this year for Dean, with a trip to Tasmania for Targa Wrest Point. The rally, which starts on Saturday the 31st of January, takes in two days of tarmac roads in the the south-east corner of Tasmania.

The event is a perfect opportunity for Dean and the team to shakedown two brand-new, 2008-spec, Subaru WRX STis, prepared by Maximum Motorsport.

Dean’s car, which he’ll race at Targa Tasmania in May, was originally to be debuted at Targa West 2008. Scheduling conflicts with the Chinese Rally Championship forced him to miss his ‘local’ tarmac rally. But with the finishing touches now being made to the new car, Targa Wrest Point looks to be the perfect warm-up for Tasmania’s ‘other’ Targa.

“The roads used for ‘Wrest Point’ are no longer used in Targa Tasmania. But we did use them in 2006 when I was in a Subaru Australia STi. The course runs south of Hobart and I remember our cars being very competitive on them. The roads are narrower and bumpier than the other stages used in Targa Tasmania. So if we can get it right for this event, we should be pretty close, setup-wise, for May. It’s going to be a really good test prior to Targa Tasmania.”

“Chris Murphy will be back in the car with me. We had a great year together in 2008, in both the Chinese Rally Championship and the APRC, and it’s a partnership that has been successful in both gravel and tarmac events.” 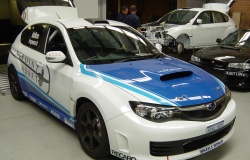 With Dean in the lead car, Graham Iddles and co-driver Paul Hopwood will join the Maxiumum Motorsport team in a second Impreza, two of only three 2008-spec Subarus to compete at the event.

“Graham debuted our first 2008-spec car at Targa West last year. And since then we’ve been working with him, doing some informal testing, and working on engine settings and diff mappings for this event. Graham Furness and Shane Carey will also be in Tasmania in the third Maximum Motorsport entry, a 2005-spec WRX STi.”

Targa West Point takes in the weekend of Saturday January 31 and Sunday February 1. For more information and spectator opportunities, check out www.targawrestpoint.com.au.