All Ready for Wrest Point

Targa Wrest Point, the latest tarmac rally to be hosted by Tasmania, Australia’s island state, kicks off this weekend, with a strong field of over 115 crews.

‘Wrest Point’ is a sister event to the legendary Targa Tasmania, and pre-event favourite is multiple Targa Tasmania winner Jim Richards. Richards is considered to be royalty in tarmac rallying circles, and his Porsche 911 GT2 will be difficult to beat. 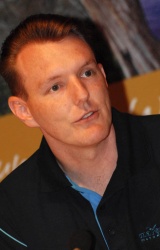 But the man regarded by many motorsport commentators as being the biggest threat Richards is Dean Herridge, and Dean was up-beat about his chances at the pre-event press conference.

“I’m really enjoying it (ralling on tarmac). As Jim said, part of of the appeal of this event is the comradary and the different types of cars. What makes this event interesting is matching our Subaru to the Porsches and Lamborghinis, cars which we don’t compete against in the Asia-Pacific (Rally Championship). And there’s a wide variety of roads. Certain roads will suit some car and driver combinations, other stages with suit other cars. I think it’s going to be pretty exciting, with big position shuffles up and down the field for the whole weekend.”

So which stages does Dean favour? “I’m looking forward to ones Jim won’t win! Probably the bumpier, narrower roads will suit my driving and our car a little bit. Some of the bigger, more horespower, stages we’ll struggle on a little bit. But there’s a great variety and it will also make the event pretty interesting.”

Along with Dean and Richards, veteran circuit racer Tony Quinn will pilot a brand new 2008 Nissan GTR, and local hopes will rest with Jason White in his Lamborghini Gallardo Superleggera.

The first car leaves Wrest Point at 9.00 am on Saturday for the first of seven stages, with a further seven stages on Day 2.

Stay tuned to www.deanherridge.com for updates throughout the weekend.