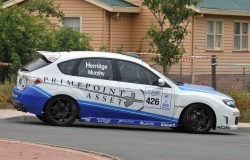 Dean Herridge and the Maximum Motorsport team have made a positive start to Targa Wrest Point, within striking distance of the leaders in their all-new 2008 Subaru Impreza STi.

Competing in the Modern category, Dean and co-driver Chris Murphy managed to keep in touch with crews running more powerful and exotic hardware, including the Porsche GT3 of leader Greg Garwood and GT2 of Jim Richards, the Lamborghini Gallardo of Jason White and the Nissan GTR of Tony Quinn. By the end of the first leg, Dean had completed the course in a time of 33 minutes and 29 seconds, just over a minute behind Garwood and just 28 seconds shy of fourth placed Matt Close. 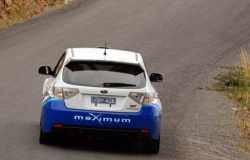 The opening day got off to a dramatic start when the Owen Boak Citroen rolled on stage two. While the crew was uninjured, the incident effected the timetable for the rest of the day and forced the cancellation of half of Saturdays eight stages.

In its first competitive outing, the Herridge 2008-spec Subaru Impreza STi performed flawlessly, the car completed just prior to Wrest Point. While this event is a good opportunity to shakedown the new car in preparation for Targa Tasmania, Dean and Chris will be pressing to climb the leader board during tomorrows remaining eight stages.

Photos courtesy of of www.sportcom.com.au/wrestpoint