Dean Herridge and the Maximum Motorsport team have claimed fifth place at Targa Wrest Point, edging out pre-race favourite Jim Richards on the final stage of the event.

Having completed Saturdays stages in seventh, the Maximum Motorsport Subaru Impreza STi found the narrower, bumpier Sunday stages more to its liking. Herridge and co-driver Chris Murphy immediately attacked the Porsche GT2 of Richards. The two crews traded times throughout the day, in the process slashing into the margins that seperated them from fourth placed Matt Close and fifth-placed Andrew Miedecke.

With just the 12km Longley 2 stage to complete the event, Herridge overtook both Richards and Miedecke, posting a hat-trick of second-fastest stage times, and capturing fifth place. 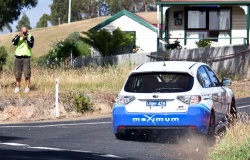 The event was won by local driver Greg Garwood in a Porsche 911 GT3. Starting as overnight leaders, Garwood held off determined attacks from both Tony Quinn and Jason White, the podium positions separated by only 12 seconds.

Like many of the competitors in the Modern category, Wrest Point was a good shakedown ahead of Targa Tasmania, and the Maximum Motorsport crew will now ship the all-new Impreza back to their Perth workshops to prepare for week-long marathon that begins on April 28.