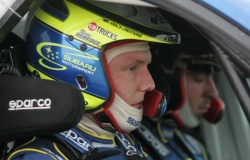 Dean Herridge is set to make a return to the Australian Rally Championship at next weekends Rally Tasmania. The ARC originally wasn’t on the radar for the former Privateer Cup champion, but the close scheduling of Targa Wrest Point and Rally Tasmania has provided Herridge the opportunity to test his new Maxiumum Motorsport Subaru Impreza STi against his old ARC rivals.

“It was a very last minute decision”, commented Herridge. “Having competed at Targa Wrest Point last weekend, the car in Tasmania. It was an opportunity too good to ignore, and we thought ‘Let’s throw our hat in the ring’! We’ll convert the car back to Group N specification over the next few days, and I’ll fly back to Tasmania for recce next week”.

“We’re been really pleased with the new car, considering Wrest Point was its first event. We made some setup changes after the first day and managed to climb a few places on Sunday for 5th outright. So that was really pleasing. Our main goal is Targa Tasmania in April, so Rally Tasmania will give us some more experience with this car on roads that will be similar to Targa Tasmania”. 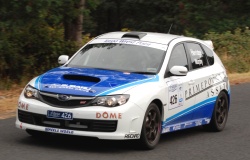 It will be first time Dean has competed in the ARC since the Great Lakes Rally in September ’07. And sitting beside him will be one of his old rivals, Glen Weston. “I’ve known Glen for a few years now. He’s been Scott Pedders co-driver for a number of years. He’s a very experienced co-driver and we’ve competed against one another in the ARC and the APRC. Chris Murphy has been my regular co-driver for the last 12 months, but he’s committed to Eli Evans for the ARC. So it’s a great opportunity for both Glen and myself to team up and to see how we go”.

So does Rally Tasmania mark a comeback for Dean to the Australia series? “We may do another round of the series. Obviously Perth won’t be too hard for us, being our local round of the ARC. And we have plans to compete at Rally Australia later in the year. But it all depends on obtaining further support. We already have a full program planned for the Chinese championship this year with Subaru China and that’s the main priority”.

Rally Tasmania runs over the weekend of February 13-15, with updates available from www.rally.com.au and www.deanherridge.com.