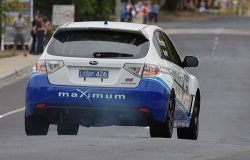 After his recent cameos in two rounds of the Australian Rally Championship, Dean Herridge is back in ‘tarmac mode’ and ready for another ‘crack’ at Targa Tasmania. Often referred to as a ‘high-speed game of chess’, Targa Tasmania is a six day tactical battle that covers 2000 kms of Tasmania’s trickiest roads.

2009 will be Dean’s third ‘Targa’, and after a promising 3rd outright last year, his sights are focused on an even better result this time around.

“I’m looking forward to the event”, Dean said after travelling from his home-base to Australia’s island state. “I think it will be as tough as ever. There are some really strong teams and the event has made some changes to the rules that will see the outright positions being fought for over every kilometre. Particularly over the last couple of days!”

Like traditional rally events, Targa features timed competitive stages; the quickest car over all of the timed stages wins. But unlike other rallies, Targa penalises crews who use too much of their cars too quickly. Mistreat your tyres and you’ll either struggle on the twisty Tasmanian roads, or be forced to change them and incur a time penalty.

While outright car speed is important, so too is how the driver is able to preserve the car early in the rally and fight to the end of the event. And that’s why the leaderboard can change dramatically on the final few days of Targa.

By far the biggest ‘unknown’ to the Targa competitors is the unpredictable local weather. “As always the weather will play a part. My last two Targa outings (’06 and ’08) were completely dry, so I am hoping for some rain. I don’t think that will make it any easier, but I think it would help us be more competitive than if it stayed dry!” 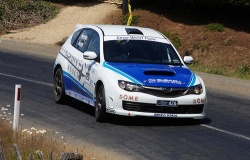 Once again Maximum Motorssport will run a small armada of Subarus at Targa. Dean and co-driver Glen Weston (a rookie Targa competitor) will pilot the #993 ’08-spec Subaru Impreza in the fight for outright honours, while Graham Iddles and Paul Hopwood return in the sister Impreza STi (#985).

Father and son combination Graham and Cameron Furness make their debut at Targa in an ’05-spec Impreza, as does Dean’s father, former Australian champion Rob Herridge. A master on gravel, this will be Rob’s first Targa, and he and co-driver Anthony Chudleigh will share the ’07-spec Impreza that Dean took to a podium last year (and most recently used in the Quit Forest Rally).

Targa Tasmania ’09 starts tomorrow (Tuesday April 28) with the Prologue run through the streets of George Town, continues from Launceston on Wednesday morning, and concludes on Sunday afternoon at the Wrest Point Hotel in Hobart.

And (internet and mobile phones willing) we’ll have daily updates from Dean and Glen as they compete for outright honours at Targa Tasmania 2009.