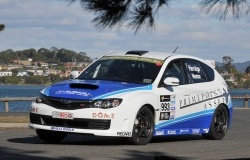 Dean Herridge has completed the Prologue stage of Targa Tasmania, and will start the competition as the sixth fastest among the ‘Modern’ competitors.

A short blast around the township of George Town, at the mouth of the Tamar River, determines the starting order for the first day of competition, and Dean and co-driver Glen Weston completed the course without incident.

“It was a good clean run”, said Dean after completing the stage. “The car was perfect. In fact, we went a little bit faster than we were intending. Tactically, it would have been better to start a little further back. But the starting order will change during the event anyway, so it’s not the end of the world”.

With dry weather predicated for the first two days of the event, Dean will be looking to control his speed and tyre wear. “We’ve elected to run soft compound tyres, so we want the rain! We’ll have to look after the tyres for the first couple of days, but it shouldn’t be too much of an issue. If we can stay in touch with the leaders and then get some rain on the final couple of days, we should be in the mix for a good result”.

During Prologue eight-time Targa winner Jim Richards set the pace in his Porsche 911 GT2, and with the cars running in reverse order, he’ll start as the final car on the road tomorrow morning, a field of more than 250 cars beginning a loop of nine stages to the north and west of Launceston.