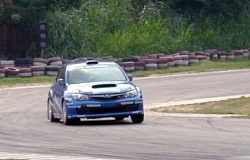 Having completed four events in Australia so far this year, Dean Herridge now turns his attention to Chinese Rally Championship and his third season as lead driver for Subaru Rally Team China.

2008 was a breakthrough season. Not only did SRTC develop and introduce a brand-new Subaru Impreza STi, Dean and co-driver Chris Murphy took it to victory at November’s Rally China, the maiden win for the Schenzen-based team.

This year the Dean and Chris return another full season, taking with them Kiwi Ben Jones who will work with the SRTC mechanics to engineer the car. 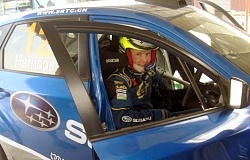 The Chinese rally calendar has had a late change, with Rally Jiangning replacing Rally Shanghai as the first event of the season. But preparation on the SRTC cars is already well underway, Dean completing his most recent development test at a kart track near Shenzen in mid-April.

“We had a really good test in April”, Dean commented. “The main objective was to work on tarmac setups for rallies Shanghai and Beijing, and we also tried a few new ideas with the car setup. Now Rally Jiangning is the first event, which is a gravel rally. We were scheduled to do some gravel testing, but unfortunately we were rained out!” 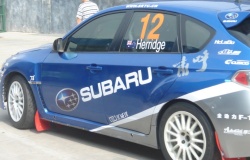 “We did four gravel events in this car last year, so we already have some good data from those rallies. Plus, world-wide, the Subaru Group-N teams work closely with STi in Japan and George Donaldson in Europe, sharing information on how to get the best out of the cars”.

The April test also marked the first appearance of the team’s new livery. For many years, Subaru factory teams have been instantly recognisable, all over the world, due to the distinctive yellow ‘S’ on the blue Imprezas. In 2008 the Subaru WRC team introduced a new colour scheme with a prominent Subaru logo, and the SRTC cars will feature a similar livery for the 2009 season.

Dean’s first 2009 event for Subaru Rally Team China is Rally Jiangning, which begins on the 12th of June.