Chinese Season Kicks Off in Nanjing 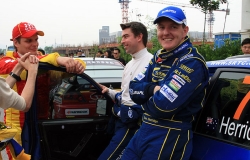 The Chinese Rally Championship has kicked off in the city of Nanjing tonight.

A late replacement for Rally Shanghai, Nanjing city is 300 kms to the west of Shanghai and features five gravel stages, run multiple times during Saturday and Sunday.

The season opened tonight with a Super Special stage in front of an enthusiastic crowd, with Dean and his co-driver Chris Murphy piloting the Subaru Rally Team China Impreza. With two full days of rallying ahead of them, Dean took a conservative approach to the short course, setting the 5th fastest time and only 3.2 seconds off the stage winning time of former APRC competitor Jussi Valimaki.

Along with Valimaki, 2009 has also seen the return of other international competitors, including Juha Salo and David Higgins. Plus Kiwi Tony Green returns with the FCACA team, piloting a brand-new, Prodrive-built, 2009-spec Subaru Impreza.

Tomorrow the event begins in earnest with the crews attacking three gravel stages, run three times each. And we’ll have coverage and news of the event, here at deanherridge.com.