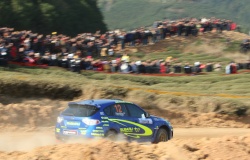 With temperatures creeping into the 30s, it’s been a long hot day for the crews competing at Rally Jiangning Nanjing. And after initially jumping into third place, after the first loop of three stages this morning, Dean and SRTC Subaru dropped both time and a position during the afternoon, as the mercury began to climb.

“We’ve really been struggling with our tyres as the temperature has been getting higher. The car has been good, but we lost time this afternoon trying to conserve our tyres”, said Dean after completing the final Saturday stage.

But while the heat effected Dean’s tyres, it also had an impact on Juha Salo. Even though he was able to push past Dean during the afternoon stages, the Finn was badly dehydrated by the time he returned to service park, and was immediately placed on a drip by medical staff.

And Kiwi Tony Green had a miserable start to his season, rolling his brand-new Subaru out of the rally on the first morning. Hitting a bank on stage three, the impact damaged the suspension of the Prodrive Impreza. But to add insult to injury, the car then rolled as he and co-driver John Allen tried to drive it back onto the road.

At the head of the field 2005 APRC champion Jussi Valimaki has been unstoppable in the Hongyun Honghe Mitsubishi. The Finn last competed in China three years ago but has lead from the first stage, and will start the final day with a 47 second advantage over Englishman David Higgins.