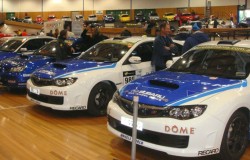 All is ready for todays start of the 2009 Quit Targa West rally. And Dean and co-driver Chris Murphy are looking for victory at the three-day tarmac rally, having posted the second quickest time during Thursday’s prologue.

Run around the Perth Motorplex (which normally hosts drag racing and sprint car events), the prologue determines the starting order for the rally.

“We’ve had a good day today”, Dean commented at the conclusion of prologue. “There were no problems at all and we posted the second quickest time. But it was a bit treacherous out there. It’s been raining here for most of the past week, so the course was wet. Once you got onto the drag strip part of the track, it was really slippery due to all the rubber on the road. A couple of competitors managed to bounce off the concrete walls. But the prologue only determines the starting order, so we were pretty careful”.

Quickest over the two passes of the prologue course was Steven Jones in a Nissan GTR, his times averaging just a second quicker than Dean, while veteran Tony Quinn will start third in another Nissan GTR.

Once again Maximum Motorsport will be well represented, with five entries for this years Targa West. Dean and Chris will lead the way in the #65 Subaru Impeza STi, while Graham Iddles returns in the #25 sister car. Paul Carrucan makes his debut in a Maximum entry, piloting the #97 Subaru. And just to make it a family affair, David Iddles (son of Graham) will drive the #71 STi, and Dean’s father Rob returns in the #64 Impreza that his used at Targa Tasmania.

The event proper kicks off at 9am (Perth time) with seven stages run in and around Kalamunda, just to the east of the Perth CBD.