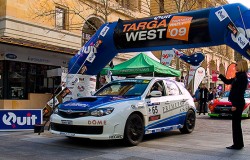 It has been a good day for the #65 Impreza of Dean Herridge and Chris Murphy, currently sitting in third place after the first seven stages of the Quit Targa West Rally.

Although the opening day was cool, the rain stayed away allowing Dean’s Subaru Impreza and the Nissan GTRs of Steven Jones and Tony Quinn to fight for the lead in the Modern Competition.

“We had a nice clean run today”, commented Dean. “The car has been good, and we’re just pacing ourselves to conserve tyres. You can’t win this event on the first day, so we’re just running our own strategy and we’ll see what happens on Saturday and Sunday”.

Just behind Dean, Perth-based Scot Alister McRae sits in fourth place, with Peter Major rounding out the top five. Among the Maximum Motorsport cars, Graham Iddles has just managed to beat son David today, just one second splitting them after the first day, while Rob Herridge is a three second further back in 26th place.

Saturday sees the crews heads to the north-east of Perth, with first stage run through the town of Muchea andthen on to fast and open stages around Bindoon and Toodyay. The leg covers twelve stages for a total of 92km.