All Done in China 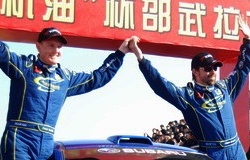 The pair pushed hard all day in the SRTC Impreza WRX STi, but were unable to match the speed of Jari Ketomaa, David Higgins and Jussi Valimaki, who shared the podium positions.

“We did as best we could today, but we didn’t quite have the right setup for this event”, said Dean at the end of a demanding Chinese rally season. “After the problems of yesterday, the target for today was to make it to the finish line, and we’ve done that. However it’s been a good season and we’ve had plenty of positives to take out of it.”

“We started off with a stumble; there was the DNF in Nanjing, and then I was quarantined in Beijing. But since then we’ve come away with some solid results, and the win in Longyou was a great reward for the team. All the guys in Subaru Rally Team China have worked really hard this year to develop the car, and they can be really proud of their efforts and the results we’ve achived this year”.

Dean and Chris now fly back to Australia for a short but well-earned Christmas break with their families, the 2010 season beginning at the end of January with the second round of the Australian Tarmac Championship, Targa Wrest Point.