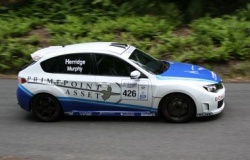 The 2010 rally season kicks off this weekend, with Dean and co-driver Chris Murphy in Hobart for Targa Wrest Point.

Tasmania’s ‘little Targa’ once again takes in roads to the south of Hobart, with 210kms of competitive stages set down during Saturday and Sunday. Last year’s Targa Wrest Point was the debut outing for the tarmac-spec Maximum Motorsport Impreza WRX STi, with the new car showing plenty of speed on the final afternoon, edging past Jim Richards’ Porsche to claim 5th place.

Live updates will be available at www.targawrestpoint.com.au, and we’ll have full coverage of Dean’s progress right here at www.deanherridge.com.

But in the meantime, check out the action from opening leg of Targa Wrest Point 2009.