All Set for Targa 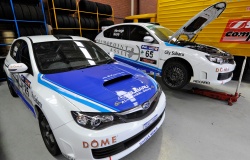 With just two weeks to go before the start of Targa Tasmania 2010, the Maximum Motorsport workshop is a hive of activity. The Perth-based team returns to Tasmania for its third attempt at the iconic tarmac rally, this year with four Subarus.

After taking two podiums from two starts in the Australian Tarmac Championship, Dean Herridge starts his fourth Targa Tasmania full of confidence. “This year we’re starting from a really strong base. We now have a lot more experience with our targa-spec Imprezas. Our reliability has always been there, and we showed at Targa Wrest Point that our cars are a good enough to put some pressure on the Lamborghinis, GTRs and Porsches”. 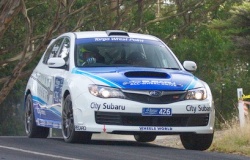 “To lead Wrest Point at the end of leg one, against cars which are much more powerful than our own, was phenomenal. It’s a real testament to the Subaru product and the skill of our guys to build and prepare the car. So we’re going back to Tasmania full of confidence.”

“We also have our sights on the Australian Tarmac Championship, which will be decided at this event. Jason White (Lamborghini) has driven really well to take three wins from three rounds, and I fully expect him and Steve Jones (Nissan GTR) to be right up the front setting the pace. But with double points on offer in Targa, there are all sorts of different scenarios that could happen. We are hoping to continue our speed and reliability and have a good run so that we give ourselves every opportunity of becoming this year’s champion.”

In the first two events of the ATC series Dean was joined by his regular co-driver Chris Murphy. But with Chris now residing in the UK, and not returning for Targa, Dean is fortunate to have the very experienced Glen Weston join him for this event. The pair have competed together on several occasions, including last year’s Targa Tasmania.

Along with Dean’s Impreza WRX STi , Maximum Motorsport will take a three other Subaru’s to Tasmania. 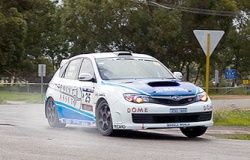 Regular Maximum drivers Graham Iddles and Graham Furness will line-up for their third Targas. Iddles will campaign his 2008 WRX STi, the sister car to Dean’s Impreza. Furness, a Perth-based eye surgeon, will again pilot a 2005-spec Impreza WRX with his son Cameron as co-driver.

And adding an international flavour to the team, Kiwi’s Brian Green and Fleur Pedersen (against whom Dean competed in the 2008 APRC series) will step out of their Mitsubishi gravel rally car and into a brand-new Impreza 2.5L tarmac car, which is nearing completion at the Maximum workshop.

Targa Tasmania kicks off with the Prologue through the streets of Georgetown on Tuesday April 27, with the podium finish at Hobart’s Wrest Point Casino on Sunday 2nd May.