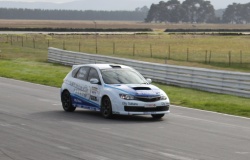 It’s been a busy day for Dean Herridge and the Maximum Motorsports crew, with an early-morning shakedown session at Symonds Plains raceway in preparation for tomorrows Prologue of Targa Tasmania 2010.

“It’s been a really good shakedown this morning”, a smiling Dean said at the end of the session. “The car feels great. We ran on old rubber this morning, just to ensure reduce the amount of kilometres on the race tyres. So it’s not exactly what we’ll start with tomorrow. But the car has run perfectly, and we’re giving ourselves the best chance of not only winning Targa, but also of taking the Australian Tarmac Championship title”. 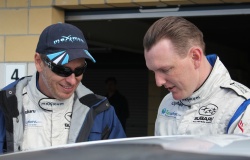 Along with Dean, who is again be partnered by experienced co-driver Glen Weston, the 16-person Maximum crew is running cars for regulars Graham Furness and Graham Iddles. And experienced Kiwi Brian Green will debut a brand-new 2.5L Subaru WRX STi, which was completed just in time for Targa Tasmania.

Tomorrow the 260-strong field heads out to Georgetown, at the mouth of the River Tamar, for the Prologue. This short blast through the town determines the starting order for the rest of the event, with the fastest car running last on the road. And on Wednesday Targa Tasmania 2010 kicks off with the first competitive stages, with loop east from Launceston to Lilydale, then heading west to Sheffield for a total of eight stages.