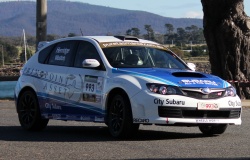 It’s been a good Prologue for Dean Herridge and the other three Maximum Motorsport cars at Targa Tasmania 2010.

The shorty, twisty Prologue, run through the streets of Georgetown, is used to set the starting order for the rest of the event. One of the last cars in the 260-strong field to attempt the Prologue course, Dean was happy with his result. “I’m very happy with that”, Dean commented after his run. “We’ll start eighth-last on the road, which is just about where we wanted to be in the starting order. The car was good. Like all the other guys, we couldn’t really get too much heat into our tyres on such a short stage. But we coped OK with that. I made one little mistake towards the end of the stage and over-revved a little-bit, but there was no problem there and the car is ready to go again tomorrow”. 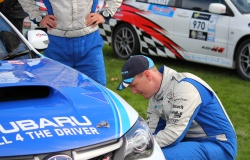 The other Maximum cars of Brian Green, Graham Furness and Graham Iddles also found the road slippery, with Iddles spinning early in the stage. “It was just dumb!”, the Perth businessman exclaimed. “The third corner in, I locked it up and spun. The tyres were still a bit ‘green’. I think we lost around 15 seconds, but there’s no damage to the car”.

With the starting order now determined, the crews will begin Leg 1 tomorrow. The ‘Northern Loop’ takes in eight stages, including Lilydale (to the north-east of Launceston) and then heads west to Sheffield before returning to Launceston.