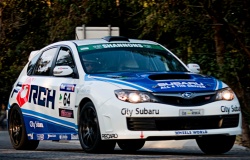 In preparation for the 2011 Australian Targa Championship, Maximum Motorsport has announced that Förch has signed on as the teams major sponsor.

Förch, an automotive consumables company, was foundered more than 40 years ago in Germany, but today has offices around the world. “We’re very excited to be supporting the Maximum Motorsport Subarus”, commented Förch Australia boss Terry Childs. “Förch has a long history of supporting motorsport around the world, and currently we’re an official supplier to the Porsche Carrera Cup in Germany. But this is the first time we’ve sponsored an Australian motorsport team, and we’re very proud to see the Förch logo on the sides of the Maximum Motorsport Subarus”.

“Maximum has a high profile, not only here in Perth but in rallying and motorsport circles around Australia. We had a ‘trial run’ at Targa West in August, with Rob Herridge driving a Förch-backed Impreza, and we got a great response. We’re really excited to be involved with one of the leading teams in one of the fastest growing areas of motorsport in Australia”.

The deal will see the twin WRX STi Imprezas of Dean Herridge and Graham Iddles fly the ‘Förch flag’ at all three rounds of Australian Targa Championship, starting with Targa High Country in November. 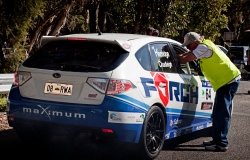 “It’s great to have Förch come on board as our major sponsor for 2011”, Dean Herridge said at the announcement of the deal. “We’ve had great support from Primepoint for the past three years, and we’ve achieved great success in that time. But to have a major multinational company like Förch involved, it’s just a great compliment to what the team has achieved over the past few years, and it makes us all the more determined to improve this season.”

“We finished 3rd in the 2010 title with two of our main rivals being Jason White (Lamborghini) and Steve Jones (Nissan GTR), but we’ve been competitive with them at various times and also shown just how competitive our Subaru’s can be. We’re getting closer all the time and with the help of Förch and our other long-term sponsors, Subaru and City Subaru, we’ll be aiming for the top spot of the ATC”.

The first round of the 2011 Australian Targa Championship is Targa High Country in November, followed by Targa Wrest Point in January and Targa Tasmania in April.