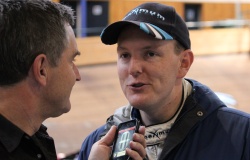 The Maximum Motorsport crew is ‘going green’ for this weekends Targa High Country, with the lead Subaru Impreza WRX STi of Dean Herridge running E85 fuel for the first time.

“I guess it might be a surprise for some people when they hear that we’re running E85”, commented Dean. “But it’s something we’ve been planning for a while. We’ve got a development plan for our cars, and this is the next step along that path.”

“We’ve running two cars here at Mt Buller. I’ll run E85, while Graham Iddles will continue with 98 RON fuel in his Impreza. Our cars run virtually the same spec, so we’ll get a good idea of what difference the E85 makes, and what changes we’ll need to make to get the best out of it.”

“There’s already a growing number of competitors using E85 in Targa, and it’s becoming more popular in a variety of motorsport categories around the world. So if we can make a gain with our car, and reduce our environment ‘footprint’ at the same time, that’s a good thing all-round.”

“Targa High Country is an all-new event. Although it uses some of the same roads as the Mt Buller Sprint, there’s a lot of new stages. Tomorrow has a series of high-speed stages, so that will be a really good test. Sunday features some tighter an twistier stages which should suit us a little more. But we’ll be going flat-out from the start to give ourselves every chance of victory.”

Targa High Country kicks off this afternoon with stage through the streets of his Mansfield, with stages held near Wangaratta on Saturday and Eildon on Sunday.